Yesterday The Guardian’s reporter, Ben Jacobs was “body slammed” by Greg Gianforte, the Republican candidate for Montana’s only congressional seat when the reporter tried to ask a question about the Republican health care plan.

That incident set off a firestorm of comments, not the least of which have suggested that President Trump’s continual invectives against a free press has encouraged an environment in which such an assault could occur. Since his candidacy began continuing through to the present, Trump has constantly demonized the press. “Liars” and the “enemy of the people” are but a few Trumpian characterizations of the press. His chief strategist Steve Bannon has  gone so far as to label the media as “the opposition party” and suggest the “media should keep its mouth shut.” And least we think the violent shutting down of a reporter in Montana was an isolated aberration earlier this month a reporter in West Virginia was arrested for simply asking Heath and Human Services secretary Tom Price a question about the Republicans’ plan for health care. Do we see a pattern emerging here?

The breakdown in tolerance for free speech may be a bellwether indicating we are headed for a serious national breakdown. On May 22, 1856, almost 161 years to the day of the Montana incident, a South Carolinian Congressman Preston Brooks almost beat to death on the floor of the Senate Massachusetts Senator Charles Sumner in retaliation for an anti-slavery speech.

When what has typically been lawful speech becomes an excuse for violence or the arrest of reporters or average citizens for questioning the powerful, our democracy is in peril. 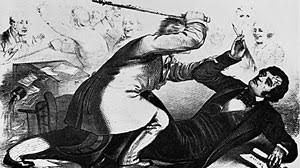 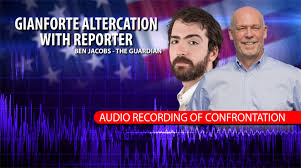 The Great Transformation is coming: http://amzn.to/2lY667o

1 thought on “Jacobs was not the only thing body slammed yesterday: The assault on the 1st Amendment”